about stealth from guide

nazgul will not destroy range weapon i tested it on my private server. fight with 3 nazgul with normal bow and it was not destroyed, melee ego weapon was destroyed on first fight with nazgul

macro don't work because there is not single books spell named breath fire... you should replace 11 with 3 for initiate power, mimic spell, not casting book spell
img {
max-width: 100%;
}
https://tokariew.xyz
Top

Next questions:
1) is there any way to increase inventory space?
2) is it ok that I can't levitate while beigh in different form? for example, I got item which gives levitation. When I polymorph to minotaur I cant fly... Is it ok or its a bug?
Tangar's tileset, addon, guides & maps: English TomeNET page ||||||| Russian TomeNet page
http://youtube.com/GameGlaz — streams in English // http://youtube.com/StreamGuild — streams in Russian
My chars @ angband.oook.cz
Top

for 1 it's only carrying less stuff
2 are you sure you can't fly? You can fly only above certain type of terrain, and mountains is not one of them. You should be able to fly if you got from item, except if form can't wear item (mimic/rings). The easiest way to check if you can fly is to try running on water terrain.
img {
max-width: 100%;
}
https://tokariew.xyz
Top

Thanks. I see now. The only strange thing that when I'm a fruit bat - I could pass mountains (c-h-h white). And when I have levitation item - I can't (c-h-h yellow). Strange

is it possbile to inscribe items on the floor? It would be very useful for traders (to change prices).
Tangar's tileset, addon, guides & maps: English TomeNET page ||||||| Russian TomeNet page
http://youtube.com/GameGlaz — streams in English // http://youtube.com/StreamGuild — streams in Russian
My chars @ angband.oook.cz
Top

Inscribing items on the floor is not currently possible in TomeNET.
Top

How to enter resting mode?


R rest. Your hit points, mana and stamina will regenerate faster
while resting.

shift+r doesn't work for me. Is there any indicator of resting? How to understand that I'm resting?
Tangar's tileset, addon, guides & maps: English TomeNET page ||||||| Russian TomeNet page
http://youtube.com/GameGlaz — streams in English // http://youtube.com/StreamGuild — streams in Russian
My chars @ angband.oook.cz
Top

You should have indicator next to your speed: 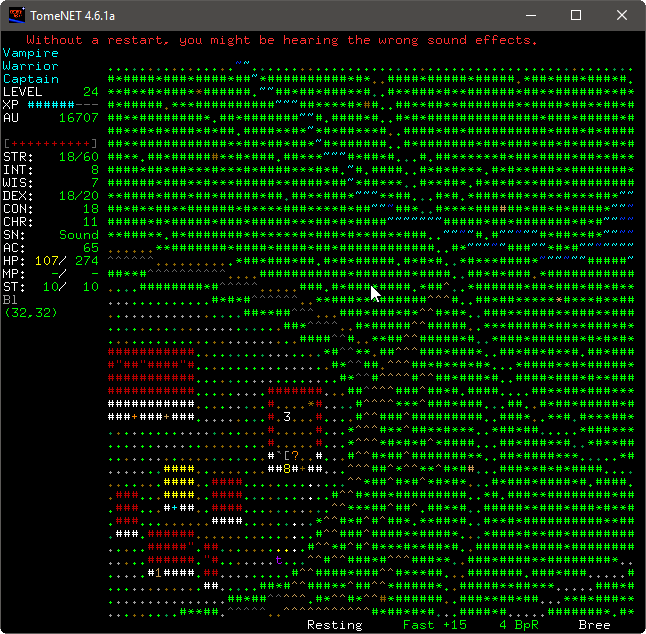 You can rest only if you don't have full mana/hp
vampire can't rest on sun without lite resistance or mummy wraping
img {
max-width: 100%;
}
https://tokariew.xyz
Top

Is it gives additional regeneration or its just the same RgHP as from items?

Teleport Away Teleports a line of monsters away.
Lv10: Turns into a ball.
Lv20: Teleports away all monsters in sight.
Required skill level for first spell level: 23.

a) If I teleport monsters away, could they wake up more monsters on level?
b) Would they try get to me again?


Genocide Removes all monsters of a certain kind from the current level.
Drains your HP for each one removed.
The race will be determined by the monster which stands
closest to you when firing off the spell. For each monster you
will suffer randomly from just 1 up to 4+(monsterlevel/8)
points of damage, which cannot be absorbed by any magic shield
or other protective effect!
Depending on the server configuration, the caster's remaining
hit points are usually halved (as an additional extra penalty)
after the spell finished.
Monsters have a chance to resist genocide, depending on their
level. Monsters inside vaults, Uniques, and monsters that are
immune to teleportation attacks cannot be genocided.
(Genocide-type spells do not yield experience or loot.)

a) is it possible to kill yourself if you cast Genocide at "p"? Cause as a mage you are also "p"-like

b) in the guide there is a stroke:
"hit points are usually halved"
Could you kill yourself with genocide or its would be minimum 50% hp left?
с) "cannot be absorbed by any magic shield". People in in-game chat said that Disruption Shield actually works and absorb damage from genocide. Is it true?

4) how to fight VS unbelivers or other mobs who block magic if you are istari? Even magic mushrooms make problems

a) where the best place to find firestones?
b) how much firestones are safe to eat at the one time?
c) is it possible to control effect of firestones? I need only Biofeedback as a mage.. Adrenaline wouldn't be good for me.
Tangar's tileset, addon, guides & maps: English TomeNET page ||||||| Russian TomeNet page
http://youtube.com/GameGlaz — streams in English // http://youtube.com/StreamGuild — streams in Russian
My chars @ angband.oook.cz
Top
Post Reply
71 posts